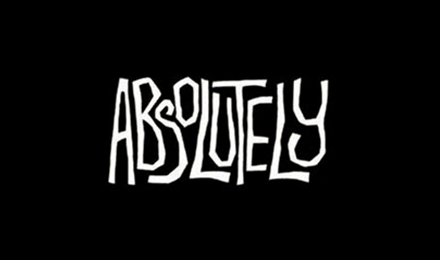 "Absolutely" remains one of the best-loved sketch shows that never had a sycophantic book written about it, and it inspires extraordinary affection amongst those who regularly followed the doings of mad chauvinistic Scot "McGlashen", Welsh handyman and wife Denzil & Gwynedd, the Niiiiiiice Family with their comfortable Slaaaacks, the Little Girl (Yes!), Frank Hovis - usually on the lllllavatory - the Laughing Man, Mr. "I Can Do Anything", Mr. Don & Mr George, the cripplingly irritating Calum Gilhooley, Peter & Jennifer Wells, yep, and of course - the small and pointless town of Stoneybridge! With its stony bridge!

"Absolutely" arose out of a group of four writer/performers from Edinburgh, Jack (then John) Docherty, Pete Baikie, Moray Hunter and Gordon Kennedy, collectively known as The Bodgers. Their Edinburgh Fringe shows were so successful that BBC Radio 4 gave them a series, then promptly cancelled it after six shows because they said all the voices sounded the same (ie Scottish, presumably), then promptly re-commissioned it after the then Managing Director of Network Radio, David Hatch, saw their Edinburgh stage show of that year and said to someone “They’re good, they should have a radio series”. it was that point the Bodgers joined up with Morwenna Banks and John Sparkes to create the second radio series, “Bodgers Banks & Sparkes”.

After some sort of telly kerfufflings, it then became Absolutely, at the same time as the company "Absolutely" was formed, a unique (at the time) bendy sort of writer/performer/producer collective, with the Directors being the six members of the Absolutely cast, plus Carl Gorham, Amanda Swift and the Absolutely producer and mentor Alan Nixon - as well as Jamie Rix and David Tyler.

Three series later, Alan was unavailable to do the fourth series, and they Absolutelies very sweetly asked David Tyler to do it, so he did and had an unutterably brilliant time. Highlights of the fourth series included "The Dressage Sketch", Gwynedd accidentally stuck inside a Hoover, the Stoneybridge council attempting their own version of Band Aid and for some reason, Pete Baikie inside a big curly beard sitting on a tractor laughing.

Absolutely returns for a triumphant fourth series to bring you Calum Gilhooley having an emergency, Frank Hovis having a little accident and the Nice Family in a life-or-death cup of tea situation. Plus the funniest car sticker in the world.

Halfway through the series, and the Nice Family are taught the Facts of Life, including the ever-vexed question - Endowment or Repayment Mortgage? Plus the true thoughts of a Game Show hostess

A Hoover with a mind of its own, a tasty wig and a giant banana skin all form part of this week's show. Plus, Stoneybridge declares UDI, but nobody can spell it properly.

Show 5 in the Absolutely canon contains Gwyn in the bathroom, a whirlwind tour round Poland with the ever-helpful Tour Guide and what Frank Hovis got served on his plate at the Café Kakapoupou

Hooray hooray, at long last, all four series of Absolutely, complete with extras and bits and pieces and whatnot has been released on a massive brick of a DVD collection called "Absolutely Everything". Click here, for goodness sake

The Absolutely homepage is brimming with good stuff, just flippin' well go there by clicking here

Here's an older and more venerable pair of videos ("It's vid-e-o") - you can get the first one by clicking here...

and the second one by clicking here.

and there was even a book of scripts - called "Absolutely the Words".

This website here is lovely and contains pretty much everything there is to know.