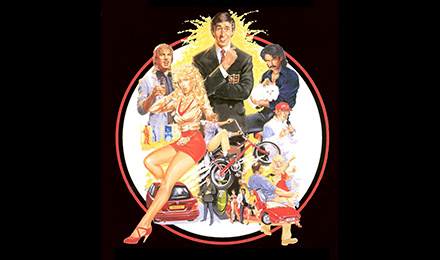 “The Man Who Thinks He’s It” was the over-arching title for Steve Coogan’s tour in 1998, co-created by him and Henry Normal. Steve asked Geoff & David to direct the show and right from the earliest stages, the ideal was to create a show whereby Steve could play four or five different characters, but without any awkward gaps where he was changing between. In his previous tour - "Live & Lewd", this interleaving had been achieved with the help of John Thomson coming on between characters, but this was to be something slightly more complex.

The casting of Simon Pegg was an obvious choice; Steve knew him from his work on an episode of “I’m Alan Partridge“ apart from anything else. Julia Davis' agent had sent us her showreel, which we quickly pounced upon and showed Steve and Henry and the choice was made.

As well as playing characters within Steve’s sections of the show - such as “the fourth Mrs. Ferrino” and Pauline’s rather odd friend “Michelle”, Simon & Julie also created characters of their own, with Simon having interstitial monologues as well, in the persona of, amongst others, a harassed Stage Manager.

In the two hour all-singing, more or less literally all-dancing show, Steve played (in order) Pauline Calf, Duncan Thickett, Tony Ferrino (closing the first half), and in the second half, Paul Calf and finally Alan Partridge. The show was written by Steve & Henry, with Armando Iannucci creating and writing the Partridge sequence with Steve. The show’s Musical Director was Steve Brown, writer of many of Steve’s songs as both Ferrino and other characters, and, of course, Glenn Ponder in the Partridge oeuvre.

Rehearsals began in February at The Old Vic in London, The show opened at the Liverpool Empire on the 2nd of March and ran for months, touring all points of the compass. It then came into London at the Lyric Theatre and went on to have a run of record-breaking longevity for a single comedian’s stage show.

The show won the South Bank Award and was also slated to win the British Comedy Award for best Live Show - until someone pointed out that the award was a bit unfair if all the judges hadn’t seen all the candidates, and the category was promptly cancelled.

Near the end of the national tour, Steve & Henry created a new storyline to serve as extra material around a DVD of the stage show itself. For this, Steve became an exaggerated persona of “Steve Coogan” - neurotic, resentful and a childish unloved bastard. Verité-style interviews were shot with the characters “Simon Pegg” and “Julia Davis”, and the storyline culminated in “Steve” having a nervous breakdown and appearing as Alan Partridge at the climax of the show, but entirely naked - a sequence we shot in front of the audience in the theatre in Manchester after the final curtain of the main show. The video was “narrated” by Peter Baynham as “Ross Woollard” in the same mode as his performance in “Introducing Tony Ferrino: Who, And Why? A Quest”

Have a look here at some behind-the-scenes photos shot on the last night of the tour. They're very grainy but grittily authentic. Probably.

You can also now get it on DVD combined with his previous tour, Live 'N' Lewd - just click here