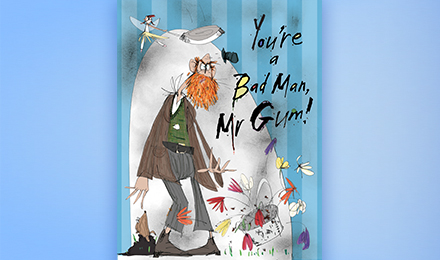 “You’re A Bad Man Mr Gum” is the first of a series of eight children’s’ books based on the anti-hero, horrible old man Mr.Gum, and his horrid doings in the town of Lamonic Bibber, alongside the adventures of a dog called Jake the Dog, a girl called Polly, and a man called Friday O’Leary.

Written by Andy Stanton, the books have won numerous awards, and are full of in-jokes, cross-references and bits where the author steps in and out of the book. So when BBC Audiobooks decided to release the unabridged tape of the first book, they plumped not just for a straight reading from Andy, but instead, one with sound effects, music and all-round production, as if it was a fully produced radio comedy.

David Tyler produced and directed this reading, recording the show with Andy in the BBC Audiobooks in their tiny (but star-filled) studios down in Bath. Apart from playing the narrator, Andy plays all the characters and sings a fair bit too, invoking the now-notorious song “You’ve Got To Have Eyes” accompanied by himself seven times and an ostrich. You can hear this as a clip, by kind permission of BBC Audiobooks...

The first CD was such a success that the BBC commissioned the 2nd and 3rd book in the Gum series do be produced by Pozzitive again - “Mr Gum & The Biscuit Billionaire” and “Mr Gum & The Goblins” - with even more music, multitracking and general Stanton-esque nonsense.

Then, one day, a wise and wonderful woman, who was known by the name "Kate Winslett", rang Andy up and asked if she could record all the books with her doing all the voices. And he said "Yes". And you can still see those CDs to this day!

By the way, the theme music - a sort of lazy zydeco shuffle - was finally discovered at about two in the morning after an all-day editing session. Originally we wanted to have Frank Zappa’s “Cletus Awreetus Awrightus”, but that would have presented us with legal, copyright and almost certainly deeply disturbing moral conundrums - so we didn’t.

There are now eight Mr Gum books, hooray! They are:

- and there's a special book written for World Book Day 2009, called Mr Gum in "The Hound Of Lamonic Bibber".

And click here to hear the magnificient "You've Got To Have Eyes" song from the Mr Gum CD, as performed by Andy Stanton himself on voice, voice, voice, silly low voice, wobbly high voice, trumpet and flamingo.

Ooh yes, nearly forgot. To buy any of the CDs, click here