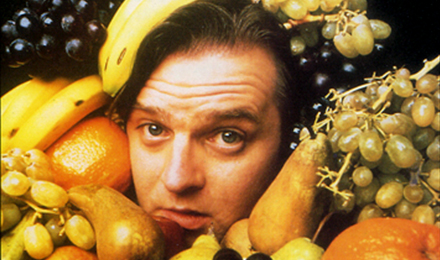 In 1990, Paul Merton and his schoolfriend and long-term collaborator, stand-up John Irwin wanted to create a show for Paul, following on from The Big Fun Show on Radio 4. It was commissioned by Channel 4 to be made by Hat Trick, and was called “Paul Merton - The Series”.

Originally slated to be directed by Ed Bye, there was a delay of a year, at which point, we asked Geoff (Posner) to direct the show, this being the first time Geoff and David (who was producing) had worked together.

The show itself was a mixture of sketches and, most iconically, stand-up delivered by Paul from a tobacconist’s kiosk inside a Tube station. Memorable moments include the talking dolphin somehow getting mixed up with Paul’s fiancée-to-be, Caroline Quentin.

Paul’s most famous joke - “My dad said “Don’t worry about the bombs. The only bomb you’ve got to worry about is the one with your name on it”. Which really worried my neighbours. Mr & Mrs. Doodlebug” - was eagerly anticipated throughout the series, and eventually appeared after the final credits of the final series.

Series 2
Re-commissioned as a series of six, we decided to make the show slightly more “personal” by cutting back on the cast and, wherever possible, having pretty much all the parts played by a rep of four - co-writer John Irwin, Neil Mullarkey, Robert Harley (“Green Wing”) & Ben Miller (“Armstrong & Miller”).

We also changed the rhythm of the show by having more quickies, and by letting Paul address the camera directly in sketches, subverting them at the same time as performing in them, most noticeably in the Submarine sketch (with Robert Daws) and the Frankenstein sketch.

Notable moments during filming came when, during a scene where Paul, as an SAS man, had blown up a fishpond, a large amount of fish was supposed to crash-land on John Irwin’s Sentry Box, it landed instead on John himself. A lot of fish can be extremely heavy, and John did have to lie down for quite a while.... The dolphin made a return visit, as did Delia Smith and for some reason, Bob Holness...

In the first show, Paul recounts his wartime experiences in a German Prisoner-Of-War camp, is visited by aliens, and gives us his views on subjects as wide-ranging as what the Romans used as condoms and the Kennedy Assassination. Plus your chance to find out what people really get up to in a Turkish Bath, and the secret life of Paul's children. Plus a ginger wig and a special treat for chicken-fanciers.

In which Paul plunges into the murky world of Genetic Engineering and does battle with an electric chair. Plus the most baffling murder mystery ever and the weirdest warehouse in the world. A talking dolphin and the tale of the cat, the burglar and the bucket of coffee complete the evening's entertainment. Oh, and don't forget to bring your butterfly net ...

This show includes the now-legendary programme "Paul Merton's Golden Years of Hollywood" where he salutes Bobby Lomax, the worst continuity man in the world. Also featuring the strangest autopsy ever as well as the truth behind the afterlife, with Paul greeting you as you arrive in heaven. Paul's schooldays are remembered in gory detail and Ringo Starr pops in for a bag of toffees…

The show centres on the strangest and certainly the funniest dream ever - more cannot be revealed at this stage! Suffice it to say that you've never seen a cat, a telephone box, a life-support machine and an elephant do that sort of thing before ...

There is also a chance to meet Father Matthews, a priest with a penchant for using Zombies around the parish and why Paul will never get out of prison. Plus stand-up on etiquette, death, Maureen Lipman and why the "A to Z" is such a damn good read.

"Paul Merton's Golden Years of Hollywood"  returns with a look at the toughest stuntman ever. Paul offers a customer a range of unique tattoos and plays the strangest round of golf imaginable. Plus a bike ride with a difference, how to keep fit with a buffalo and a pair of welding gloves and what happened when a band of yobbo conjurers went on the rampage ...

He's back! The man with the deadliest line in dead-pan returns to his Tobacconist's Kiosk to dish out his own brand of wit, wisdom and boiled sweets. This episode also features Paul in a very strange Butcher's shop, as the man who can see into the future, and what happened when Paul joined the SAS. Plus Paul has a go at acting underwater and staying dry at the same time.

More Kiosk quips as Paul opens up a sideline in dry-cleaning. An heroic trip to the South Pole, a car, a sheep, a pig and Marilyn Monroe all put in an appearance this week. Plus, what really happens in a hospital behind closed doors and a fairly cheap cucumber joke.

In this episode, Paul meets some tricky customers in his Kiosk and has to call in an Exorcist and some jellied eels. It's glamour and excitement all the way, as we travel to 18th Century Ruritania, 1930s Hollywood and 20th Century Stansted Airport. And Bob Holness makes an unexpected appearance.

Yee ha! It's hoedown time at Tombstone Gulch as Paul rides in to town! Which has nothing to do with a zebra, a traffic warden and a roulette wheel. Paul reveals that he used to be Cilla Black, and tells of his wartime adventures, and what he really said to Winston Churchill

Paul expands the Kiosk into a Legal Advice shop, a Foto Centre and a café, but spends most of the time talking to a wasp. King Edward the VIIth comes to dine, and the Pope applies for planning permission. With special guests Simon Williams and Terry the Wasp....

The final show in the series, and Paul turns up as the last person you'd want to share a lifeboat with. From his Kiosk, he explains why NASA never empty the ashtrays, what happens when you take a pylon to the cinema and something rather special about Peterborough. Meanwhile, Delia Smith makes a guest appearance, but only as a hologram...

Click here to hear the famously mournful signature tune. It's called "Please Maestro" and it's French.

Click here to see the original handwritten first copy of the "Meters" sketch with the "Gas", "Electricity" and "Non-Zebra" meters. Written by Paul Merton and John Irwin, this first draft has an elephant for the punchline. A zebra was a compromise. Isn't it always?

The first series was released on video (but not yet on DVD) and you can still hunt it down - click here - It's most excellent. See if Channel 4 will release the second series sometime......

and best of all, Paul Merton himself has released a DVD covering his whole career, "The Paul Merton Collection", including many extracts from the show - click here