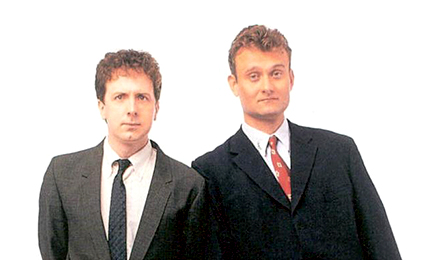 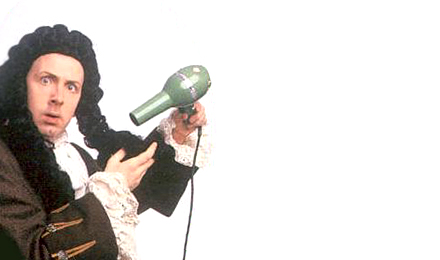 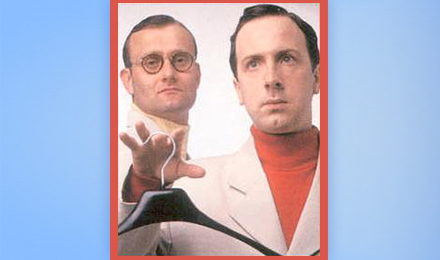 Continuing the BBC’s search for a pre-watershed sketch show, in 1994, they commissioned Steve Punt & Hugh Dennis to cerate their own sketch show. Imaginatively titled “The Imaginatively-titled Punt And Dennis Show”, the boys asked David Tyler, Steve’s long-term writing associate to produce the show. It followed on from their appearance as half of the quartet in “The Mary Whitehouse Experience” and included running characters from that show, including Milky Milky. The show was also the long-term grandchild of Punt & Dennis’s original radio show “Live On Arrival” ad the great-grandfather of the still-running “The Now Show” on Radio 4.

Notable appearances included Alistair McGowan as spymaster Kropotkin in the 60’s ITC-style spy serial “A Man called Martin”, Ronni Ancona, a cameo from Steve’s sister, Helen Punt, and a little foreshadowing of a cameo from Tom Baker as the ultimate voice-over actor - a comic trope spotted by another double act some ten years later in Little Britain...

Regular characters included the ever-drunk Michael and Tarquin from World Of Wine (“You poured it on a fish...!), The Gullibles (“We’re always falling for scams!”), the Video Diary Of Samuel Pepys, the Tiny Jockeys, and Embarrassing Dad (“No-one minds! No-one’s looking at us!”).

The series aired in 1994 and was recommisioned, although David didn’t produce the second series. The best of the series was also released on video, under the title “Punt & Dennis: The Imaginatively-Titled Video”


Here’s the original Press Blurb from the series:

Steve Punt and Hugh Dennis are the best new double-act to emerge from the Alternative Comedy scene, and in an unprecedented move, BBC1 have given them their own primetime series, starting on Wednesday July the 13th at 8.30 pm.

Already familiar to BBC1 viewers for their sketches on five series of Jasper Carrott's Carrott Confidential, the younger audience will know them as the slightly less hairy half of BBC2's The Mary Whitehouse Experience, one of the most successful new sketch comedies for years.

Their new show - imaginatively-titled "The Imaginatively-Titled Punt & Dennis Show" features double-act, stand-up, sketches, music and the return of Hugh & Steve's most popular characters. Mr. Strange, whose inexplicable fondness for  curdled milk, and bewildering catchphrase "milky milky" will be popping up, as well as the infuriating dad, who says "What's this? It's got a good beat to it!". New characters include Len, the builder from Hell, two tiny Jockeys, who regard Macauley Culkin as "a very big man", the Gullibles, and our weekly spy-serial, provisionally called "The Man Who Was ... Thingy".

Written and performed by Steve Punt & Hugh Dennis, the show is produced by David Tyler (credits include Spitting Image, Absolutely, Paul Merton - The Series, and Steve Coogan's Paul Calf Video Diary) and directed by David G. Hillier, whose most recent production was The Jack Dee Show.

In this first episode, we meet World Of Wine expert and drunk Michael (“You poured it on a fish!!”), have an close encounter with a penguin, and, damn you!, watch the first instalment of the thrilling spy story, “A Man Called Martin”. “No-one knows I’m here...”

Michael apologizes to Tarquin for being as a sick as a dog and demonstrates a handy use for an airbag, while Martin is recruited to the deadly mission and meets... French Bird. Meanwhile, Embarrassing Dad picks his daughter up from a concert...

This week, episode three of our thrilling spy series "A Man Called Martin", in which Martin hits the bottle, the dance-floor and a passing barman.

In this episode, wine experts Tarquin and Michael attempt to present "The World Of Whisky", space-alien Dr.Gustav Alabaster learns how to chat up Earthlings, and we learn how to play “Spot The Stiff” when watching World War II Movies

This episode takes a Brits-eye view of the Kennedy Assassination, and a Royal watcher’s eye-view of the Queen’s dress. Plus more gullibility from the Gullibles.

This episode takes an in-depth serious look at funerals, devil worship, Hells Angels and cheesy biscuits and we discuss the alleged decline in Educashional Stanndards.

We shouldn't really link you to any YouTube pages, but there are loads of clips out there including many of the Milky Milky ones...

You can, of course, buy the video by clicking here

It's not only fab but has very good outtakes, mainly of Steve corpsing while Hugh prats about in the background...

Plus the now-famous "log-in-the-camera" incident...

And you can always nag the Beeb to release it on DVD....

And read all about Steve & Hugh here