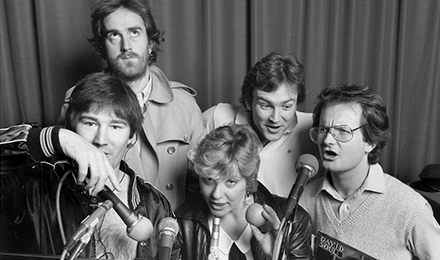 The doings of “Radio Active, “Britain’s first National Local Radio Station” scarcely need chronicling here; the show ran for seven series in the Eighties and was the biggest comedy hit of its time. David Tyler produced the final two series, which are documented below, and then, in 1988 he produced a one-off special to mark, in an echo of the 60s show “It Was Twenty Years Ago Last Tuesday”, seventeen years (or something) since Radio Active began. Or something. It was Michael Fenton-Stevens who decided it was the anniversary of something, anyhow, so you’d have to ask him.

Series 6
This was co-produced by David Tyler and Paul Mayhew-Archer and the logistics were made rather fiddly by the fact that at the time, Geoffrey (Perkins) was producing Spitting Image in Limehouse Studios, East London, whilst at the same time, Helen Atkinson-Wood was playing Mrs. Miggins in Black Adder 2 over at BBC Television Centre (West London). Rehearsals probably took place somewhere on the Central Line connecting the two...

Highlights of the series including the By-Election Special in the small town of Thodding (“Now it’s time for another Thodding by-election”) and the D-Day Show (with Morwenna Banks momentarily replacing Helen) including the return of the Radio Active Drama Repertory Company in their stirring war movie (“How is it Sir?”.... “Sorry, Howitzers”).


Series 7
Produced by David Tyler, this final series went out in a blaze of glory with such shows as the afore-mentioned “It Was Twenty Years Ago Last Tuesday” (“Welcome back Paul Simon, who was huge in the 60s, which is odd, because he’s absolutely tiny now...”), and the show that caused more controversy than any other on radio that year, the Sunday Morning religious show, “God Alone Knows”, hosted by the Right Reverend Reverend Right. Unwittingly straying into controversial territory, the show was only saved from a worse fate by the fact that we cut the Martin Brown “Guess The Weight Of Jesus’ Cross” competition sketch before transmission...


Anniversary Special
To celebrate the somethingth anniversary of something, the cast  reconvened at the Duke Of York’s Theatre on the 1st of December 2002 for a special one-off to “launch” Radio Active’s move over to digital in Radio Active’s “Digital Turn-On”. In an evening filled with equal parts nostalgia and hysteria, and the show notably being Angus’s first public appearance since being hounded out of hosting Have I Got News For You by the press, the recording ran for a couple of hours and much happiness was enjoyed by all the fans.

“Thodding used to be a small Cornish fishing village. But now it’s a bustling market town in Gloucestershire.”

"It Was 20 Years Ago Last Tuesday"

"Probe Round The Back"

It’s fifteen years since Radio Active last linked up with Radio 4, which has been forced to struggle on alone with its puny collection of has-been shows like The Archers and The Today Programme. But now, for a one glorious half-hour, Radio Active is back, to announce the launch of its full range of digital stations, such as Radio Active FM, Radio Active Talk News, Radio Active Sport and the channel for the slightly older listener, Radio Inactive.  So if you want to hear Martin Brown as a  Shock Jock, and the full unexpurgated secret diaries of Agony Aunt Anna Rabies, pour yourself a nice drink, turn the lights down low and get ready for the full-on pleasure of Radio Active’s Digital Turn-On

There are quite a few glorious Radio Active sites on the net, including this one

You can buy the (slightly measly) one audio tape here

Oh, and there's always the book. With a nude Martin Brown on the cover...