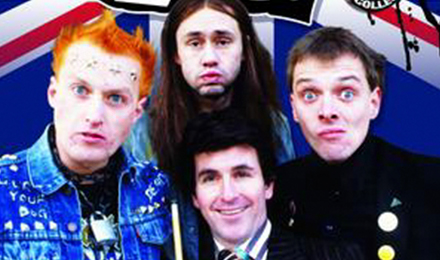 The Young Ones crystallized the explosion in Alternative Comedy that had been brewing in clubs and on radio and the fringes of television. Set in a studenty flat and starring Rik Mayall as Rick, Adrian Edmondson as Vyvyan, Nigel Planer as Neil, Christopher Ryan as Mike, the show appeared to disregard structural conventions and its energy - and the fact that it was profoundly funny - breathed life into the sitcom format. It also played with the fourth wall concept by having a band play in the house each week, notable visitors including Madness and Dexy's Midnight Runners.

It was produced by Paul Jackson and directed (apart from two episodes) by Geoff Posner.

Fascist oiks at the Town Hall want to demolish the house. Why bother with Vyv around to do the business for them

As Rik, Vyv, Neil and Mike move into their new house, the talking statue at the front door begins an odyssey of zaniness that is to culminate in a worker's revolution and a fully-fledged benefit concert in the front room.

A terrorist siege in their own house; a visitation from hell; a fairytale world that flourishes while they are asleep - what more entertainment could four students possibly want? Yet they are so B-O-R-E-D that Neil is driven to dig himself a grave and Vyv chops his finger off

A potentially explosive situation erupts when a bomb falls on the house. But worse! The TV licence man calls...

It's party time! Where else could you mingle with the four horsemen of the Apocalypse, a giant sandwich and a singing tomato? Pretty amazing stuff, eh? Just ignore Neil's boring hippy friend chilling out in the fridge...

While London floods Rik tries to elevate proceedings with a game of hide-and-seek. Meanwhile his sociology file is set on fire by Vyv, Mike's room is occupied by a pride of lions, and landlord Alexei Sayle turns into an axe-wielding homicidal maniac.

Who produced the world's stickiest bogey and the world's stupidest bottom-burp? Who's smashing the oiks on University Challenge and who's swotting away for teacher like a total spasmo?

Hey man! It's really weird! Strange things keep happening. Like plates disappearing and the tables keep, well, shrinking. Looks like there's a poltergeist in the house...

Ashes to ashes, funk to funky, Vyv is now a video head and Neil's wearing a dress because some really selfish negative vibe merchant boarded up his bedroom. Only pop music can save them now.

There's bogeys on the blankets and snot on the sheets when Neil and the others come down with the worst colds in the history of civilisation!

Hey, everybody! School's out! Hurray! Hurray! Except, like there's nothing to do, man, apart from getting on a big red bus and having a really explosive trip. It should be pretty good fun, actually.

You can buy the DVD of series 1 here and indeed, you can find series 2 here

And, yep, there's even the book, "Bachelor Boys". Which is extremely funny... you could buy it here