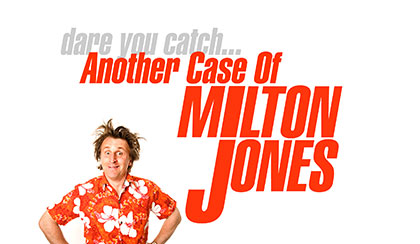 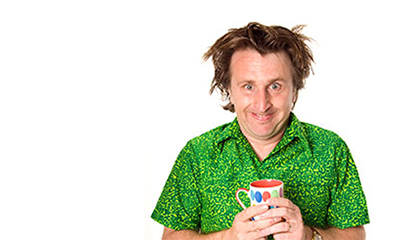 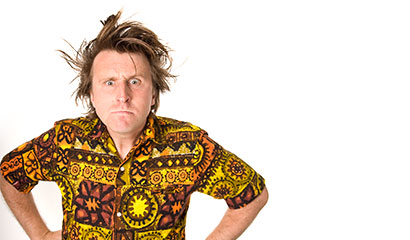 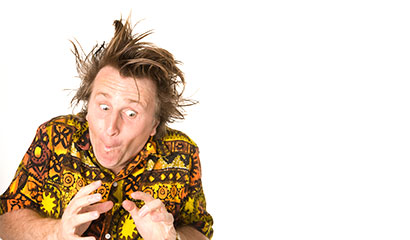 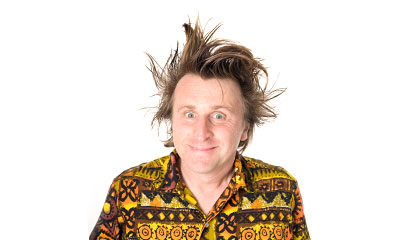 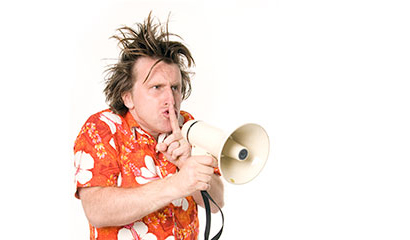 "Another Case Of Milton Jones"

Another Case of Milton Jones s1-5

"Tune in next week, when you can catch - Another Case of Milton Jones!..."

After the series of "The House Of Milton Jones" in 2003, Milton decided to try a new format. Based on the original title of "The Casebook Of Milton Jones", we hit on the idea that each week, Milton would be an expert in some field, the top man in that profession - master surgeon, brilliant detective, supermodel, whatever - and that each week would be a narrative adventure stopping off along the way for sketches and stand-up. A sort of re-versioning of "The Very World..." which had increasingly tended towards a "profession" for Milton anyway.

As ever, the signature tune and jingles were provided by Guy Jackson. By popular demand, the shouted "Hey!" at the end of the "Very World.." sig was worked in to the new one also...

Series 1
In the first series, we took certain elements of "House Of..." along - the characters of Anton and Susan (now played by Debbie Chazen) and the writing relationship with James Cary. Milton and his sister Susan (usually playing his assistant) would generally meet Anton - who would always prove frustratingly super-attractive to Susan. The other male parts alternated week by week between Milton Jones stalwart Dave Lamb and Steven Kynman (who James had met during "Concrete Cow"), while the other female parts, usually involving playing Milton's girlfriend, were played by Lucy Montgomery.

Over the series, Milton was variously a brilliant Richard Rodgers-style architect, a superchef with an award-winning restaurant, a Formula 1 racing driver, a biogeneticist, an international musical maestro and an International Chess Grandmaster

Series 2
After the success of the new format, we refined it a little further, stripping it back  to a smaller cast but a slightly more elaborate storyline. This mean that we now had Milton and effectively, his full-time foil, Anton going out to face the world, which in practice meant Dave Lamb and Lucy Montgomery doing every voice, age and accent under the sun. In this series, Milton plays a barrister who gets involved in an art theft in a tale which somehow morphs into a spoof of "The Da Vinci Code", a race-winning jockey involved in a massive betting scam, the newly-elected Mayor Of London and a globe-trotting explorer who falls in love with the heiress to the Millets fortune...

Series 3
In late 2008, we broadcast the third series, now given not only its usual 6.30 slot on Mondays but the glorious Sunday lunchtime repeat. With various cast members' babies being imminent, this meant that Lucy Montgomery & Dave Lamb had to stand down, with the result that the wonderful Ingrid Oliver joined the cast, with the male parts being shared out between Ben Willbond (the co-creator/star of “Deep Trouble”) and writer/performer Dan Tetsell (“The Museum Of Everything” and “Lab Rats”). This time out, Milton, assisted as ever by the imperturbable Anton, contrived to be an international photographer, a David Blaine-style magician and illusionist, a health guru and seller of mad dietary products and an antiques expert and collector...

The show was nominated for the Chortle Award for "Best Use Of Stand-Up On TV or Radio", an unusual but surprisingly apt category.

Series 4
This new series, upgraded from four to six shows, aired throughout February and March 2010. As well as our new regulars Ingrid Oliver, Ben Willbond & Dan Tetsell, we welcomed back Lucy Montgomery fresh from her success in Bellamy’s People and Dave Lamb, fresh from being the unmistakeable voice of Come Dine With Me. This time out, Milton, assisted as ever by the imperturbable Anton as played by the perturbable Tom Goodman-Hill was variously a mathematician, a world-beating cyclist, a travel expert, a weatherman, a miner and, for some reason, a cross between an ornithologist and a test pilot...

Series 5
This next series of six shows went on air between July and August of 2011 and as well as regulars Ben Willbond, Dan Tetsell, Lucy Montgomery & the inimitable Dave Lamb, the show was also joined by Margaret Cabourn-Smith (taking time off from Bigipedia) - plus the ever-steady hand of Anton brought to life once more by Tom Goodman-Hill. The series kicked off with Milton in a Brian Cox-ular vein as a celebrity Astronomer, and proceed by way of him being a Royal Speech Therapist in a “Kings Speech” spoof, an Eddie Stobart haulage mogul, a gardener who tangles with an Alan Titchmarsh-style villain and a WikiLeaks freedom fighter all the way to Milton being the world’s most famous Undercover Journalist. Which makes him a very bad Undercover Journalist...

In the first of the new series, Milton plays at being a world-beating architect and tries his hand at building a bridge out of Lego, playing a naked match of boules at the Sorbonne and designing the world’s first rotating mosque.

This week, Milton plays at being a musical Maestro and at the age of 37 becomes the oldest winner of the BBC Young Musician Of the Year…

In this episode, Milton plays at being a Biogeneticist, wins the Nobel Prize, and sneaks through Customs with fifty shrews concealed about his person.

In this episode, Milton is a world-beating Chess Grandmaster in a thrilling tale of Cold War tension, supercomputer-controlled laser guns and Lego...

This week, Milton plays at being a celebrity chef, and manages to tangle with a glass-bottomed boat, a large Spanish waiter, ten rolls of Sellotape and an over-excited Robbie Williams...

This week, Milton turns out to be an expert Formula 1 Racing Driver… along the way, he’ll meet a Texan millionairess, Simon & Garfunkel, a man called simply “Mr Hodgekiss” and some hot toffee...

In the first of the new series, Milton is a world-famous barrister, who gets involved in a dastardly plot involving the Bayeux Tapestry, the National Trust, the bloodline of the rightful Kings of England and a quote for some guttering...

Milton turns polar explorer and Desert Island Castaway all in the same show. Along the way he meets Buzz Aldrin, a Tyrannosaurus Rex, the Dalai Lama and the world’s largest anorak.

Milton becomes a Championship Jockey and races his way from Blackpool Sands to Abu Dhabi via Las Vegas, Cheltenham and a dodgy baseball bat warehouse in Toxteth. Plus a high-stakes poker game and the Queen meets a burping Australian.

Milton is accidentally elected Mayor of London. Politics, global warming and the London Eye come together in a fast-moving plot of dastardly scheming and international peril. Will the pigeons take over London? Will the ice-caps melt? Will Cuba join in a game of International Twister? And can we save Wandsworth from destruction, and if so - why?

In the first of the new series, Milton is a world-famous photographer who travels from the catwalks of Milan to the jungles of Bolivia to find the perfect picture of a calendar

Milton turns collector and antiques expert whose passion for Fabergé Eggs leads him to bankruptcy, a Russian sleigh ride and a mysterious Swiss Schloss...

Milton becomes an internationally-renowned magician and illusionist who gets tangled up in a devilish plot to make the Bank of England disappear...

Milton is he’s a health and diet guru who plans to take over the world by means of a Walnut Shell & Nettle face scrub...

In the first of the new series, Milton’s a daredevil test pilot and Top Gun who gets tangled up in a fiendish plot to replace the turkey twizzler...

This week, Milton is a mathematical whizzkid who gets tied up in knots and rings trying to solve the equation of the mysteriously disappearing geniuses...

In this episode, Milton’s a world-famous Travel Entrepreneur who builds the world’s most Extreme Sports Hotel and crosses the Atlantic in a rather unusual way...

In this episode, Milton’s a world-class cyclist who gets tangled up in a close-fitting body suit and the population of Holland...

This week, Milton waves goodbye to the world of dance and musical theatre to pursue his dream of becoming - a miner!

This week, Milton proves that you don’t need to be a weatherman to know which way the wind blows; you just need a fully-working anemometer and a mouse called Tim.

Move over Brian Cox - Milton is now a world-famous astronomer and seeker after scientific truth and accuracy. Typical Sagittarian.

Diplomat Milton is on the run after leaking all the UN’s emails - except for the Swiss ones, which were too dull. And he meets a shadowy hacker. And the shadowy hacker’s mum.

Milton crosses stamens with a deadly rival in the vicious cutthroat world of gardening.

As the royal Speech Therapist, Milton helps a Prince find his voice and a king find his pomegranates. He also starts three wars in one afternoon, and another three a little later on.

Milton is the king of the world of refrigerated haulage with his very own fleet of iced lorries. But his 1000th lorry contains a secret more deadly than one of his mum’s famous all-day breakfasts..

Click here to hear the signature tune, as created by Guy Jackson

Click here for a random jingle of the day!

The BBC, bless them, have released all five series as both Download-To-Own, which you can get to by clicking here

And the entire second series on CD, so please do click here if you fancy buying it

Take a look at the flyer we sent out to everyone to advertize the start of the 5th series by clicking here...

Here's a link to a page</u> about the lovely Tom Goodman-Hill, who plays Anton.

And here's a link to James Cary, Milton's fabulous co-writer.