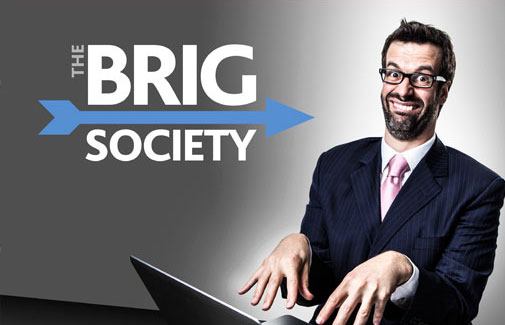 "The Brig Society" - Uh-oh. Marcus is in charge

In 2013, whilst touring his stand-up show, coincidentally called ‘The Brig Society’ - who could have guessed - Marcus Brigstocke decided that his Radio 4 alter ego, Giles Wemmbley Hogg, could be left safely in Budleigh Salterton for a while*, and it was time to embark on a new show. Created with Giles Wemmbley Hogg collaborator Jeremy Salsby, ‘The Brig Society’ is a mixture of stand-up and sketches where -

- each week, keen to do his bit for society, Marcus puts his name down at Volunteer Services only to discover that he’s been put in charge… of a thing! From hospitals, to railways, from British fashion to Scotland, each week he starts out by thinking “Well, it can’t be that difficult, surely?” and ends up with “Oh - turns out it’s utterly difficult and complicated. Who knew...?”

To create the shows, we need to find three actors who had a ridiculous range of voices and who could perform at full tilt in front of an audience having only seen the script about a billionth of a second before. Step forward Rufus Jones (“Hunderby”, “Holy Flying Circus”), William Andrews (“Sorry I’ve Got No Head”) and Margaret Cabourn-Smith (“Miranda”)!

The second series followed at lightning speed - well, a year later, which is lightning speed for broadcasting and included episodes where Marcus became a drug dealer and founded a new religion - a show which resulted not in a devastating thunderbolt but in a number of awards. The 3rd series started transmitting in September 2015, and included appearances from Colin Hoult, Justin Edwards, Tom Crowley ("Sad Faces") and Freya Parker ("Lazy Susan").

Series four, transmitted in November 2016, was a two-part special examing the great British press, - or as we put it at the time - "Marcus Brigstocke has decided to sort out the press as he plunges headfirst into the contents of the great British newspaper and comes up smelling of Daily Mail"...

* Giles was last seen wandering into the fudge store beneath Mr Figgis’s Budleigh Fudgery. Given that fudge contains all the basic food groups, we’re not concerned.

Uh-oh - Marcus Brigstocke has been put in charge of a thing! This week - Marcus has volunteered to be the face and indeed, the trousers, of British Fashion.

Oh dear - this week, Marcus has been given his very own hospital to run, complete with doctors, nurses and pyjama smokers outside the entrance so you know it’s a proper one.

Uh-oh - this week Marcus has been given his very own prison, and looks into the problems of overcrowding, radicalization and syncopated tray-banging

Ai Carumba! This week, Marcus has volunteered to be the face, not to say beard and glasses of British Food...

Hoots mon and so forth - this week, Marcus has been volunteered to be the King of Scotland and is hoping very much not to get kilt.

Oh dear -  this week, Marcus has been given his own railway franchise to run. Please note, this programme may be running late; please change at Tiverton Parkway for The Archers.

Uh-oh - Marcus has got himself elected as a Member of the European Parliament. So it’s off to Brussels to meet Europe’s finest parliamentary minds and also UKIP.

Uh-oh - Marcus has decided to create his own Social Media site. Please RT. Please Follow. Please Like. Please give all your details to Google and the NSA.

Uh-oh - Marcus has Broken Bad and become a drug dealer. Along the way he’ll examine the complex interrelationship between legalization, culture, hypocrisy and cheese.

Uh-oh - Marcus has grasped the bull by the horns and become a farmer. What could go wrong? As he himself puts it- “Dairy, livestock, cattle - it’s all grist to my mill.”

Glory be, Marcus has decided to form his own religion, based on peace, lovingkindness and probably war.

We would like to inform you that Marcus has decided to open a bank. That’ll be £25 please. If you would like to call our customer helpline... that will be another £25.

Uh-oh - Marcus Brigstocke has decided to find out about the pure, noble and honest game of football - and also FIFA. Plus he’ll be tackling some of the sport’s biggest problems, like racism and homophobia - and also FIFA.

And as a football manager, he’ll be taking his amateur side all the way to the Premier League. And possibly beyond, if Qatar pay him enough.

Uh-oh - Marcus Brigstocke has decided to cross the Gender Gap and become a woman. Expect a clear-eyed assessment of sexism and a doubling of the bathroom candle budget.

Ahem. Marcus Brigstocke coughs politely, dons a crumpled linen suit and fibs for Britain as he tries his hand at becoming a diplomat. On the way, he’ll look at the history and origins of diplomacy, the training required and the fact that approximately 60% of the modern British diplomat’s work is spent apologizing for Jeremy Clarkson.

In this nicely-furnished affordable programme with very attractive views, Marcus Brigstocke decides to solve the housing crisis. He’ll also be building a basement under the studio and knocking down a party wall he shares with The Archers.

"The House Of Lords"

Good Lord - is exactly what Marcus has become in order to peer under the ermine and see if we really do need that second chamber... Along the way he’ll be looking at the history and function of the House of Lords, getting himself a Coat Of Arms and having a good old rummage in the Woolsack.

Please turn your radio over and start listening as Marcus Brigstocke has thirty minutes to retake his GCSEs. During the show he will be sitting a genuine GCSE exam set by the Producer in an attempt to get the bottom of Grade Inflation and also the class.

Extra extra - Brigstocke starts own newspaper shock! Read all about it on Radio 4! If that were somehow physically possible! Plus we reveal the headline of the year that you’ll never get to read...

Marcus becomes a victim of his own newspaper as he gets caught up in a scandal and discovers that it’s really really difficult to doorstep yourself...

Yes, result! You can download the first series of The Brig Society on iTunes and Amazon thusly and the second series here. Likewise, clicky here for Series Three...

Of course, rehearsing a radio recording is a pretty glamorous affair; there's coffee and a table and occasionally some satsumas. Click here for some behind-the-scenes photos and here for us recording the show at the Edinburgh Fringe...

... and for maximum silliness, here's some post-show photos taken in Edinburgh after the last recording of Series 2. No-one knows what these hats were doing inside an official BBC Truck. There's simply no way of knowing.

And take a look at the lovely flyer we sent out to advertize the start of the 2nd series by clicking here...