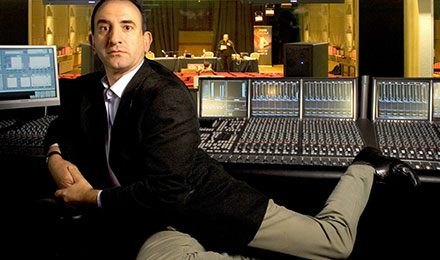 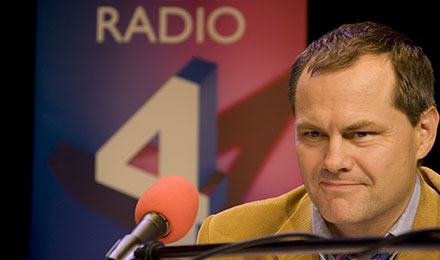 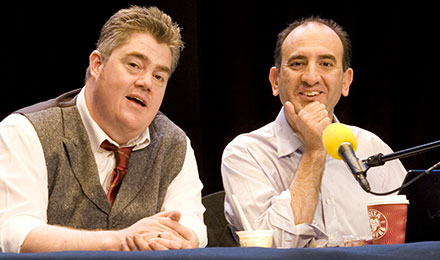 In May 2005, the first edition of Armando Iannucci's Charm Offensive was broadcast on Radio 4. In developing the idea, Armando had reasoned that some of the most enjoyable times he'd had on The News Quiz were when the guests went off on a mad streak instead of sticking carefully to the format, and that this might be combined with the sketchability of The Now Show and the silly quizzing element of The 99p Challenge to make an enjoyable topical half-hour that wasn't forcibly committed to covering the news or keeping score. It was recorded on the Wednesday evening, and edited swiftly the next day in time for a 6.30pm transmission.

The show also has sketches, messed-about archive, interviews and lots of lies. For example, the pilot show featured:

- Plus, an in-depth interview with a BBC Sound FX expert as to how you make the sound of "A Gay Kiss"

- further to Anne Robinson's extensive facial plastic surgery, we presented our panel with the offcuts from Ann Robinson's head and asked them what they'd like to use them for...

The pilot was recorded in May 2004, and had (unusually) four guests; Lucy Porter, Dan Gaster, Jimmy Carr and John Oliver. It also featured Emma Kennedy playing a BBC Sounds Effects expert talking about "creating the sound of a Gay Kiss". Being topical, it was never actually broadcast. It was actually called "What Happened There?", although the script was simply headed "The Armando Iannucci Show".

The series itself began in May 2005, and guests over the run of six included John Oliver, Phill Jupitus, Marcus Brigstocke, Clive Anderson and Jo Brand.

Promoted to the coveted News Quiz slot, transmitting Fridays at 6.30pm and repeated on Saturday lunchtimes, the new series began in early June 2006. As well as regular returning guests from the first series, the line-up was augmented by the likes of Chris Addison, Mark Watson, Stewart Lee, Alexei Sayle & Jack Dee.

Memorable highlights included the Middle Classes ritually burning a BBC Weatherman inside a giant wicker cumulonimbus, and Armando turning the recording studio into a small trattoria.

The third series went out a year later in late Summer 2007, starting with a show recorded at the Edinburgh Festival. Augmenting the cast over the series were newcomers like Dara O’Briain, Russell Howard, Justin Edwards and in the fourth recording, American comedian and star of "Arrested Development", David Cross (Tobias Fünke).

The fourth series went out at its now-established time of late Summer, between The Now Show and The News Quiz. Once again it kicked off with a recording at Edinburgh and then ran for five more shows, welcoming back by-now old friends of the show like Marcus Brigstocke, Andy Zaltzman, Simon Evans, Will Smith and Phill Jupitus and welcoming new faces, like Miranda Hart and Matt Kirshen. Highlights of the series included Vaughan Savidge’s "rolling news" where we literally rolled him across the stage on a little wheely trolley whilst he read the news, Dara O'Briain & David Mitchell’s magnificently petulant Anglo-Irish spat, Justin Edwards’ recollection of the time he worked in a capacitor factory, and Miranda Hart’s inability to recall the underlying fundamentals of a small novelty cigarette-dispensing plastic donkey.

Hear a chunk from the untransmitted pilot episode - it's got Jimmy Carr and John Oliver in it!

Play the Signature Tune - the most un-Armando-ish piece of music we could find.

Of course, you can download all of the shows by going to iTunes or by clicking here - and Series 3 is also available as a CD too.

Have a look at the Photo Gallery - exclusive behind-the-scenes shots of men writing a radio show. Some of those men include Phill Jupitus and Jack Dee!

Here's a link to the great Vaughan Savidge, or, in Star Wars-speak, Vadge of the Vaughnsa...