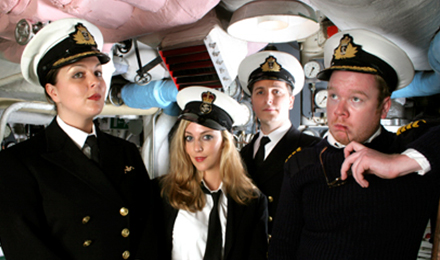 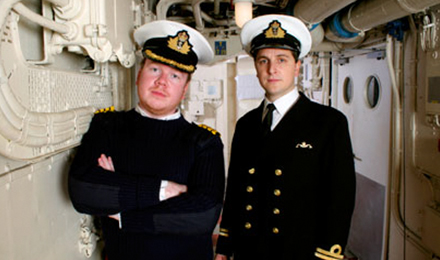 ++++In an increasingly uncertain defence environment, a deadly new arms race has begun. In an attempt to secure her boundaries, Britain has deployed the very latest sub-sea military technology++++

++++Beneath and beyond the front line, these are the adventures of the HMS Goliath. A 55,000 tonne M-Class nuclear stealth submarine, prowling 5,000 metres below the surface++++

Deep Trouble was the result of a collaboration between writer/actor/directors Jim Field Smith and Ben Willbond. Both have fathers in the Services - Army and Air Force respectively, and they hit upon the idea of writing a forces sitcom set in the Senior Service, and more specifically, a submarine.

Jim and Ben created their own pilot, directed by Jim, which was sufficient to get them a series commission from Radio 4. The first series was developed from the pilot and recorded over four days at the Soundhouse Studios, with an additional “location” day for the exteriors running around Wimbledon Common...

The whole show is held together by the extraordinary bass tones of the narrator, Jonathan Rylands - AKA "Rhino".

Series 2
The second series of four underwent some retooling in the time HMS Goliath was in Dry Dock. PO Radcliffe was stood down, but a new regular joined the cast, Lieutenant Barry, played by Alice Lowe (“Garth Marenghi”), a calculating cold-hearted IT Officer who usually rang rings round the rest of the crew and was surprisingly handy with heavy ordnance.

Tom Clancy, as voiced by Ben, and who had made persistent and unwanted cameo appearances in the first series was retained to do the credit sequences at the end of each show.

Steve Furst again makes a guest appearance, as an Italian-American CIA Operative on the island of San Terros, as does Laura Solon. In the final episode, Barry reveals she is the flatmate of Daniel Craig, who makes an appearance at the end of the show. We asked Daniel Craig if he’d play himself in the episode, who thought about it for about a picosecond, but very graciously said he was too busy with Bond publicity commitments. Steve Furst stepped in to play the part.

A series of 6 half hours was commissioned for production in 2008, but alas, Jim went off to direct Hollywood movies. You know how that can happen…

The first episode of a new comedy set on board HMS Goliath, a 55,000 tonne M Class nuclear stealth submarine, cram-packed with a range of incompetence, ambition and military know-not-how.

In this episode, a NATO exercise with our American friends goes horribly wrong as we find that torpedoes and coffee don’t mix

In this episode, some US Navy Seals set hearts and minds a-flutter on board the Goliath, whilst PO “Fatty” Lewis gets stuck up a pipe

This episode involves a Russian sub, a Harrier Jump Jet, a sewing machine and an unexpected promotion for Lucy.

In this episode, a stray astronaut and a rock band cause confusion in both Captain Wade’s head and Portsmouth.

The first episode of the new series and a new crew member, a noxious gas, a beetroot smoothie and bad haircut spell disaster for Trainor, Wade, Fairbanks and the crew …

When Trainor meets up with an old friend, it’s time for a snowball fight, a French telephonist, some spinach and a Mk7 belt-fed anti-tank gas-cooled heavy machine gun.

This week, an overheating nuclear reactor means a dangerous encounter for Captain Wade with a lobster, Fairbanks with a laser-guided jet and Trainor with a rather large Prince Albert.

Goliath is coming home, and as the crew prepare the end-of-term revels, Barry finds a donkey, Wade finds a baby, Fairbanks finds an Admiral and Trainor finds an unexpected jazz band...

See the crew of HMS Goliath in their natural habitat in the photo gallery...

(alright, it's actually HMS Belfast) (which is a jolly nice place to visit - click here for info )

Download an extract from the never-transmitted original pilot here -