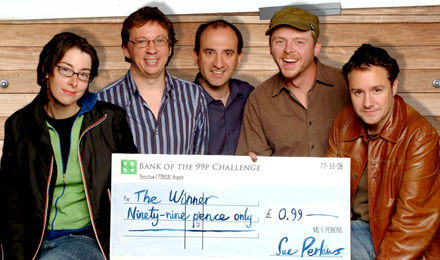 In late 1997, Kevin Cecil & Andy Riley came up with the idea of a sort of panel game sort of about nothing. Here’s the original blurb:

King Stupid is a new Radio Four panel game where four panellists are funny. It's not about any of the following:

King Stupid is also a show where you will not hear any of the following phrases:

1. "Now into our mercifully brief second round ..."

2. "This weeks winners of the keys to the executive washroom are ..."

3. Tony, I'm going to give you a hundred points for that."


Now we've got that clear, let me tell you what it does have ...

It has a chairman called William Vandyck - he's a writer performer and also a barrister but he's got more hair than Clive Anderson. He's funny.

It's written by Kevin Cecil and Andy Riley who are two extremely original and fresh writers who amongst their many writing credits have contributed some of the best stuff to "Friday Night Armistice". They're funny.

Amongst the regular panellists are:

Peter Baynham. Peter is the dark mind behind much of the decade's best comedy. He wrote for "On The Hour" and "The Day Today" and co-wrote the BAFTA winning "I'm Alan Partridge" with Steve Coogan. He co-wrote the controversial "Brass Eye" with Chris Morris and is responsible for some of the darker sketches from Radio One's "Blue Jam". He is entirely suitable for a 6.30 transmission.

Sue Perkins. Sue Perkins will be known to you as one half of Mel & Sue, co-presenters of Channel Four's students' breakfast show "Late Lunch". If you can think of a phrase that's the opposite of shrinking violet, use that to describe Sue.

Simon Pegg. This is Radio 4's chance to catch the next comic generation whilst eating their tea. Simon has just finished a hundred date sell-out tour supporting Steve Coogan, which is about to re-open in the West End. He's appeared in "I'm Alan Partridge" and "Faith In The Future" and he's about to star in the new sitcom from Graham Linehan & Arthur Mathews, the writers of "Father Ted".

Dave Green. Dave Green is a comic journalist and writer who fortunately for us has a mouth as well. He creates and writes Britain's best comedy e-zone "Need To Know" and is responsible for large numbers of mouse potatoes actually rising up from their computers and coming to the recordings to cheer him on.

King Stupid - the show that likes to dumb up.


The Pilot - “Off The Dial”
Originally piloted as “Off The Dial”, the guests in that pilot were Sean Lock, Jessica Stevenson, Simon Pegg and Richard Herring, and the chairman was Graham Linehan, later to work with Kevin and Andy again on Black Books. It also had Peter Serafinowicz playing the scorer and doing various sketches. Clearly, none of those people ever worked again.

The Series
The series was hosted by William Vandyck, a practicing barrister who had already made his mark in the Radio 4 comedy “And Now In Colour” and the almost-made-it-to-a-series TV Pilot sketch show “It’s A Mad World World World World”.

Other regular panellists included Simon Pegg and Peter Baynham, as well as Sue Perkins (who went on to host “The 99p Challenge”), Morwenna Banks and Tom Binns.

Intended as a sort of younger “I’m Sorry I Haven’t A Clue”, although we all strenuously denied this at the time, memorable highlights of the series included Simon Pegg putting lyrics to the Emperor’s March from Star Wars...

“I’m Luke Skywalker and I’m very very sad
‘Coz I just found out that Darth Vader is my dad...”

... and Peter Baynham’s ideas for stalls at a Village Fete - a “Get The Bear Down From The Cross” competition, “Guess the Weight Of the Fete” and a lucky “Dip Your Hand In The Bear’s Wound” stall...

It ran for six episodes, and was very well received until the final show, when a fairly innocent joke by Peter during a round where the panellists had to devise promotional slogans for unusual towns (“Come to Beachy Head and toss yourself off...”) caught the puritanical ear of the then Controller of Radio 4, James Boyle. He immediately cancelled the series.

After some pleas and petitions, the show was eventually recommisioned, albeit with a change of title and host, as “The 99p Challenge” - which then ran for five series and picked up a silver Sony Award along the way

Have a look at an original script and also Kevin and Andy's very own "Answers Book" for the panellists of Episode 2...

You naturally want to hear the clip that got the show cancelled. Alright then, click here if you must...

You can download-to-own King Stupid from iTunes or simply click here, that should work nicely...