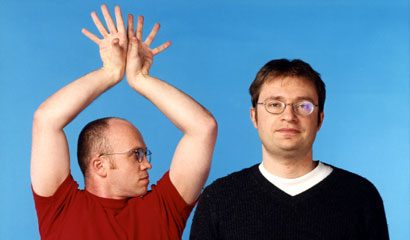 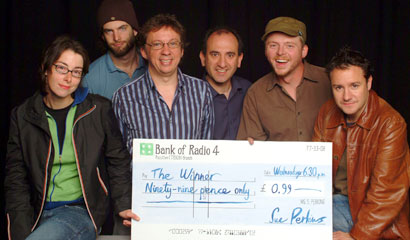 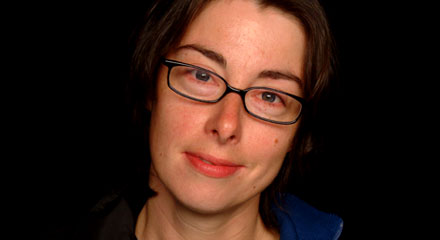 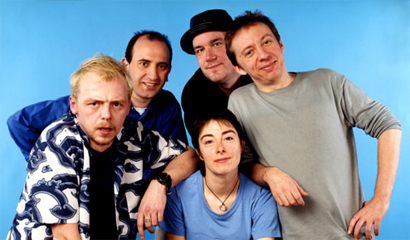 The 99p Challenge was the renamed and retooled show arising out of the ashes of "King Stupid". It ran for four series and the final series won a Sony Award (Silver) in 2005.

Because of this, and to avoid - or possibly to sow - confusion, we've always referred to the first series of The 99p Challenge as Series 2

Series 2 (see?)
On air almost eighteen months after the demise of "King Stupid" and at the later (and some might say safer) time of 11pm at night, here is the original blurb for the show:
"It's back - the show they didn't dare call "King Stupid" Series 2! A new presenter, new panellists, new title, new timeslot, new silly games and more jokes than ever in the show Robert Hanks in The Independent called "a brilliant panel game" and Tracey MacLeod in Night & Day called "genuinely brilliant".

Written by Kevin Cecil & Andy Riley - who've just won a BAFTA for writing "Robbie The Reindeer" for Aardman Animations - the show is hosted by the glorious Sue Perkins (of Mel & Sue fame). The regulars are Simon Pegg (Shaun Of The Dead, Hot Fuzz) and Peter Baynham (writer/performer of Blue Jam/Jam (Radio 1/Channel 4) and I'm Alan Partridge). Other guests across the series include Richard Herring (from This Morning With Richard Not Judy and Fist Of Fun), Melanie Giedroyc (the other, more Mel-ish half of Mel & Sue), banned Xfm DJ Tom Binns, writer/performer David Quantick (whose show Junkies is the first ever sitcom premiered on the Net) and David Schneider (from Friday Night Armistice)."

This series set the pattern for the next few years - the use of Nena's "99 Red Balloons" as the playout music; the silly game at the end of the show (including the much-loved "Conveyer Belt" - a parody of the Generation Game ending where someone - usually Peter Baynham - had to "remember" as many made-up surreal concepts as he could muster - and Kevin and Andy singing the jingles as painfully badly as possible. This was also the first appearance of Armando Iannucci, who, of course, went on to become a regular regular of the show.

Series 3
This series carried on in the same glorious vein; notable additions to the cast included Bill Bailey, Nick Frost ("Shaun Of The Dead", "Hot Fuzz") and Peter Serafinowicz, returning as a panellist after his debut on the pilot episode.

Highlights included the final round of "Beat the Clock" - "I've got a shiny chrome clock here. And you have a claw hammer. I'll wind the clock up, and on my mark, you have exactly ten seconds to really show that clock who's boss. If the clock is still functioning at ten seconds, you lose all your prize money." In an atmosphere of near hysteria in the studio, Simon Pegg smashed the clock up with such vigour that we earned a reprimand from the Health & Safety section of the BBC. We solemnly pledged that if we ever played that round again, the protagonists would wear safety goggles.

Series 4
At last - the show won back the coveted 6.30pm primetime slot. By now Armando Iannucci was a regular, as was Marcus Brigstocke, and the show also featured Jon Holmes joining the writing team for the first time, as well as being an occasional panellist. It also featured little mad playlets before the signature tune, usually performed by the cast themselves.

Series 5
The final series continued in the same glorious vein; newcomers included Miranda Hart and Dan Antopolski, and Tony Roche (of "The Thick Of It" fame) was now writing for the show as well. We could have carried on for ever, but alas, Radio 4 said "no".

End game- "Half & Half" - "I'm going to ask you eight questions Armando. You have to get half of them right and half of them wrong."

End game - “Higher or Lower” - “It's like Play Your Cards Right, where you have to guess whether the next card is higher or lower, but instead of cards we're using people. You've got to guess if the next person I reveal will be higher or lower in stature than the last one.”

End game - “Beat The Clock” - “I've got a shiny chrome clock here. And you have a claw hammer. I'll wind the clock up, and on my mark, you have exactly ten seconds to really show that clock who's boss. If the clock is still functioning at ten seconds, you lose all your prize money.”

End game - “One Minute With A Four Year Old!” - “Picture yourself in the checkout aisle of a supermarket. I am your four-year old child. You have to resist everything I say. If you give in to a single one of my demands, you lose. Ready? Then let's go.”

End game - “Gargle For Gold” - “I'm going to ask you five questions. You have to gargle the answers, and get them all right. BUT! For every drop of water that you spit on my face, you lose two pee from the prize pot.”

End game - "How Well Does The Winner Know The Other Contestants" - “Hopefully over the last half an hour you've got to know the others; we're going to see just how much. We're going to ask you questions about them that only a friend would know the answer to. But first we have to make sure they can't give you any clues. Simon, Bill & David, please climb into this soundproofed booth...”

End game - "'Physics GCSE Paper 1“ - “All you have to do is answer some genuine physics questions taken from this years physics GCSE paper 1. You may turn over your paper ... now.”

End game - "Which Member Of Wham Am I?“ - “The rules are very simple. I am a member of successful big-hair Eighties duo Wham. But which one? You have only one minute and a maximum of TWENTY QUESTIONS to find out.”

End game - "Find My Keys!- “Here's the scenario. I can't find my keys. Without them, I can't lock the house, I can't start my car, I can't even launch a Trident missile from my nuclear submarine. And it's made me very flustered. You've got half a minute to help me find them by suggesting where I should look. Ready? Go!.”

End game - "The 99p Challenge Boast-Off!" - "Simon and Armando have 30 seconds in which to outboast each other. Whoever's ego is intact after 30 seconds is the winner."

End game - "Enough Reality Shows To Keep ITV and Channel 4 Going For Two Years!" - "ITV and Channel 4 desperately need your help. If they don't think up more things for swearing cooks and ex-Brookside babes to do, they'll have to go back to investing in quality drama and entertainment. No-one wants that. So - you have one minute to come up with all their new reality shows."

End game- "Spin-Off Movies For Starsky But Not Hutch!" - "Hutch is gone. Hutch is history. SO you must think up new films for Starsky. Think up enough in thirty second, you win 99p. But, if you put Hutch in a film, you lose everything."

End game- "Name The Celebrity Babies!" - "Celebrities are creative, interesting people, so much better than you or I. That's why they give their babies the names they do. Here's a maternity ward full of new-born celeblets. I need you to name them all in a minute. On your marks, get set: Christen!"

End game- "Clean Swearing" - "You have thirty seconds to profane each other without using any actual swear words. For ever real swear word you utter, one pence will be docked from the 99p jackpot - and this programme will be fined £5000 by the Broadcasting Standards Authority"

Ah, The 99p Challenge. For heaven's sake, have a look at the photo gallery!

Click here to hear Kevin & Andy's jingles live and unbearable!
- Half & Half
- Clean Swearing
- Name The Celebrity Babies
- Spin-Off Movies For Starsky But Not Hutch!
- Phrases That Haven't Caught On Yet But Will!
- The 99p Challenge Boast-Off
- Which Member Of Wham Am I?
- Verbal Fighting
- Beat The Clock

Download a script and Kevin and Andy's very own "Answers Book" for the panellists. This script was the one that won the Sony Award.

Someone at Wikipedia seems to know an awful lot about us - click here to have a look.

Oh, I know what I meant to say - you can buy it all, every last bit of it, from iTunes or by clicking here...