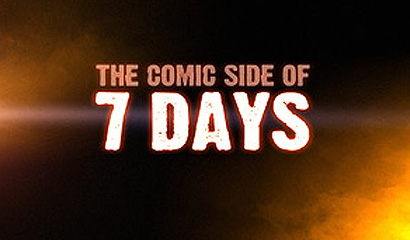 GO TO THE "EXTRAS" TAB FOR LOTS OF GREAT CLIPS

"7 Days" was a comedy show conceived by Tony Roche and Andy Marlatt, a British and an American writer who had met whilst working on a Sir David Frost pilot for Pozzitive, "The Strategic Humour Initiative"

Here, more or less, is the original blurb:

7 Days
The top comedy brains in the UK analyse, satirize and make funny-ize the previous week in a frighteningly fast-paced half-hour tied together with music, video clips and shiny bright graphics that handily reduce the news of the past 7 days to "7 Words", or "7 Numbers", or even "7 Vowel Sounds"; for people who are really busy, really rushed, really lazy, or have no tongues.

Tony Roche is a comedy writer who wrote the cult BBC2 comedy "World Of Pub" and whose short film, "How To Tell When A Relationship Is Over" won "Best Short Film" at the Montreal Just For Laughs Comedy Festival. Inbetween times, he's written for Armando Iannucci's Gash on Channel 4, Alistair McGowan's Big Impression, The All New Harry Hill Show and Radio 4 cult hits The 99p Challenge and The Sunday Format

Andy Marlatt is an American. Nevertheless, he is a world famous satirist and comedy journalist, thanks to his brilliant website Satirewire.com ("because you can read and we have a web site"). Rivalling The Onion in its satirical look at the world, Satirewire boasts such now-legendary stories as "Study: Women Who Drink More Fun To Study" and "Zimbabwe Changes name To AAA Zimbabwe"

Here's a link to SatireWire: http://www.satirewire.com

The first series ran for six half-hours in early 2005, and was immediately re-commissioned by the then BBC Three Controller, Stuart Murphy, for another run later that same year - but of  thirteen shows, an absurdly overwhelming commission which we somehow managed to carry out.

A small obstacle came our way when the BBC decided that the title "7 Days" (around which the whole rhythm and feel of the show was based) wasn't a distinguishable enough title for the average digital channel browser, so a number of suggestions were made by them of varying levels of awfulness until, with moments to go before the presses rolled, we all compromised on the baffling "The Comic Side Of 7 Days" which did the job, retained the "7" bit and was lousy. We still just call it "7 Days"*

The format of the show was simple, we took news topics and filmed comedians talking to camera about them, and edited them down to the funniest stuff. Interspersed with that were Tony & Andy's "lists" of Sevens... cut at a fast pace, voiced radio-style and matched with astonishingly sharp and speedily-produced graphics by Andy Carroll and Jonny Brosnan (joined by David Edwards in the second series). In the first series, we had different narrators each week - Kevin Eldon, Robert Webb & Ralf Little all got a go, but for the second series, we hit upon the non-dulcet tones of DJ and 99p Chalenge/Now Show star Jon Holmes to provide the exact tone of high-energy venom required.

The edit was usually a race against the clock, but by the second series, we'd got the method down sufficiently well to allow the format to become more sophisticated; there was time to put music under lists, and to shoot live-action sketches for example. Unlike the first series, there was probably no danger of not making it on to the air in time. The only mishap occurred one week, when somebody nameless (and by now probably jobless) in BBC Scheduling accidentally put the show, complete with swearing and highly unsuitable content, out at 6.30 in the morning, to a bunch of baffled pre-school children, and their startled if sleepy parents.

David Tyler produced and directed Series 1 and the first nine of series 2, and exec'd the final four, with Karen Rosie producing.

By the end of the second run, BBC Three had a new Controller, who decided that the channel didn't need satire any more, and didn't recommission it.

That Controller is now gone....

* The show came within an inch of being called "How Nuts Was That!!". Truly.

And here are some of our favourite clips: