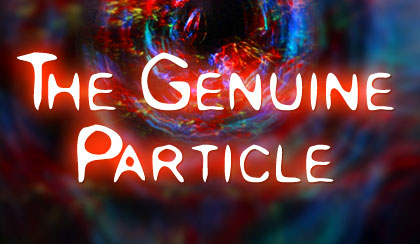 Big Bang Day: The Genuine Particle was a comedy set at the opening of the Large Hadron Collider at CERN and written by Steve Punt (of The Now Show). It formed the final part of Radio 4 ‘s day of special programming to mark the switching of the Collider. In the words of the original strapline - “All the physics is true. Just the comedy has been changed”

In 2008, two Russian mathematicians posited a theory which suggested that the unusually high energies created within the accelerator beams may, under certain prescribed circumstances, create what physicists jocularly call a “wormhole”, and that this wormhole could - again, theoretically - act as a sort of exit door to any time-tunnel created by a future time-travelling civilization.

So far so true, albeit speculative. But the fun part is this - according to the theory, any time traveller from the future could only go back in time as far as the first wormhole on earth - which would be at CERN, in September  2008.

Which means that for a future time machine, the dial can’t turn you back to Roman times or the Victorian Age, but only to September 2008.

And that time-travellers may start to appear. Genuinely.

Starring Reece Shearsmith and Geoffrey Whitehead, and set hundreds of meters underground, this is a comedy thriller where time travel, wormholes, a lost security pass and a nice cup of tea are the elements that constitute Steve Punt’s Theory of Grand Unified Comedy It also has the unique property that every bit of physics in it is true. Theoretically at least.

A fast-moving comedy set 100m underground in the Large Hadron Collider where a wormhole, an ID Card and an electric buggy combine to prove the old adage - “Time travel isn’t as easy as those relativistic closed spacetime loop equations would have you believe”

You can download "The Genuine Particle" to enjoy an infinite number of times by clicking here ...

"The Genuine Particle" completed a special day of programming on BBC Radio 4's "Big Bang Day". You can read all about that by clicking here

"The Genuine Particle" was set in CERN, a socking great particle physics facility underground somewhere in Europe. If you've ever felt you simply must learn more about subatomic physics, then click here

...... and if you've ever felt you simply must learn more about Steve Punt then click here