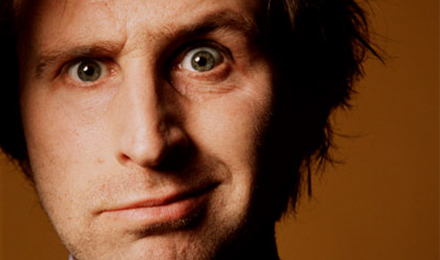 "The House Of Milton Jones"

The House of Milton Jones

In July 2003, after doing three series of the award-winning “Very World Of Milton Jones”, Milton decided to try a new format. Linking up with sitcom writer James Cary (“Think The Unthinkable”, “Hut 33”), together they created a new sitcom tailor-made for Milton’s own comic persona to fit into.

The eponymous household consisted of Milton and his sister Susan, played by Olivia Colman (“Peep Show”, “That Mitchell & Webb Look”), together with her slightly useless sort-of-electrician husband Ian, played by Nigel Lindsay. Susan and Ian had a pair of six year-old twins, although they were never heard during the show, merely referred to. The actual house itself was owned by Milton’s gloriously eccentric aunt, Auntie Dilys, a sort of elderly continuation of Milton by other means, often out-surreal-ising Milton himself, to their evident mutual enjoyment. Dilys was played by Rosemary Leach. Completing the ménage was the next-door neighbour Anton, who was always popping round, in true sitcom fashion. Ever-smooth, ever-resourceful, this was the first appearance of Anton, who was to remain as a character playing against Milton for the next three series. Anton was created by actor Tom Goodman-Hill. Another running joke was that Anton and Susan always found themselves attracted to each other, in a confusedly-embarrassed British sort of way, but the passion was never consummated.

Although the show only lasted for one series, when Milton returned, with the (still currently running) “Another Case Of Milton Jones”, he took certain elements of “House Of..” along - the characters of Anton and Susan (then played by Debbie Chazen) and the writing relationship with James Cary, who co-writes “Another Case...” with Milton.

In this episode we first meet Milton’s household - his sister Susan, husband Ian, Great-Aunt Dilys upstairs and the lovely and ever-competent Anton next door.

The House Of Milton Jones is the sort of house where washing machines explode, ghost hunters hover and there’s a wasp doing Tai Chi on the lawn. Meanwhile, Milton tries to move into an Old Peoples’ Home...

Susan and Ian decide it’s time to take a long-awaited holiday. Unfortunately, Milton decides it’s time to try and  come with. And also to get Venice and Vienna slightly muddled, with rather soggy results...

Romance is in the air as the household tries to have a dinner party but unfortunately, sends Milton out to get the ingredients. Which nearly causes a war between Wales, Italy and New Zealand...

Milton discovers he is a nobleman and now has the freedom of Wrexham. Meanwhile, an important football match and a broken television lead to the house being converted into a castle, complete with a moat, a banqueting hall and a stormy climax...

When Milton inadvertently robs a bank, it leads to prison, pigeons, megaphones and a dramatic courtroom showdown...

It’s the twins birthday party, and Milton is banned from trying to help. Which is probably why a petting zoo, a Spitfire, and some tigers arrive just in time for the cake...

Click here to hear the signature tune, as created by Guy Jackson

And click here for a random jingle of the day!

or here - on the Comedy CVs website or indeed, here - via Chortle (This also has a list of where he's currently performing)

Here's a link to a page about the lovely Tom Goodman-Hill, who plays Anton.

And here's a link to James Cary, Milton's fabulous co-writer

And if you fancy downloading it - and why wouldn't you - then just click here...