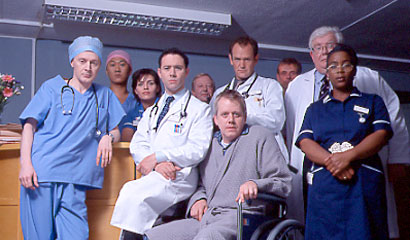 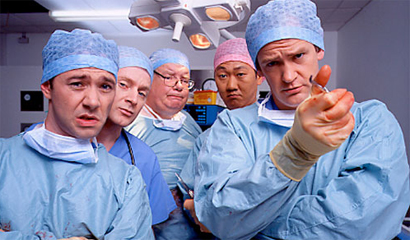 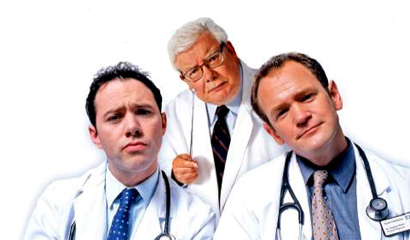 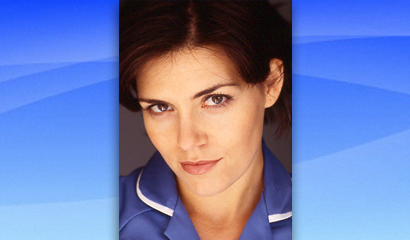 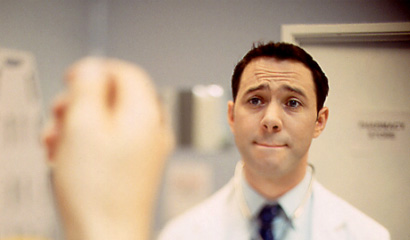 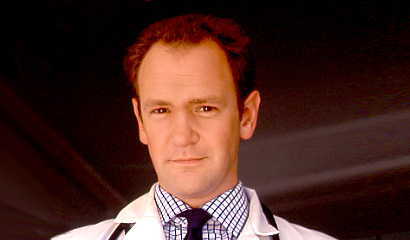 Dr Fintan Coyle was a doctor who'd had to retire from active practice because of a chronic back injury. So he sat around, created the format for the BBC's "The Weakest Link" and wrote a pilot script for "tlc" (at that point, called "Trust"). We did a readthrough in front of the then controller of BBC Two, Jane Root (and thereby inadvertently subjecting her to a stream of Richard Griffiths' most gloriously off-colour anecdotes), and we got greenlit for a series of six.

The location was a semi-disused hospital in Bow, a very rough part of London. It was perfectly normal, between takes, for the cast to be accosted by confused patients clutching samples and asking them things like "Where's Urology mate?"... After a while, Reece (Shearsmith) & Xander (Armstrong) started telling them the answers.

The series transmitted in November/December 2002 on BBC Two

Here's part of the original blurb:

tlc is a story about one man's journey into hell.

That man is Junior Doctor Flynn.

That hell is an NHS hospital

The time is now.

tlc is set in a large modern urban NHS hospital. Somewhere. It doesn't matter where, because, like Doctor Flynn, you'll never see the outside world.

tlc is a jet black comedy on the state of modern medicine and the NHS.

tlc is shot on location, mostly handheld, to enhance the feelings of enclosure and surreality.

tlc is not a sitcom set in the cosy world of doctors, nurses and patients demanding bedpans. It's about breakdown and failure, perpetual night and lack of sleep, Catholic guilt and cigarettes.

Why does the chaplain always carry a rib spreader?
Why is there a crocodile in the ward bath?
Is that Jesus over there in a white coat?
and how do you score a gram of coffee round here?

Perhaps it's time to meet the firm...

Flynn is the new intern in a General Surgery firm. He is young, hopeful, innocent, eager to learn. He doesn't know it yet, but he's also never going to sleep again. He is Catholic, comes from a family of doctors and has always had a vocation. Now, he's beginning to doubt his faith in God and in medicine. Flynn is also incredibly accident-prone, and frankly, cack-handed. In a world of surgical precision, this could be a disadvantage. He is also sexually immature, and bedazzled by the perpetual allure of the nursing team, especially Nurse Judy, who sends him into spasms of self-denying frustration.

Flynn is played by Reece Shearsmith

Noble is the Registrar on Flynn's firm and thus one level senior to Flynn. He's halfway to total cynicism, and all-knowing in the ways of the hospital, sexually "busy" and the man who's job it is to initiate Flynn into the nightmare. He's also a stylish and experienced doctor. Noble can reset a dislocated shoulder with a flick of the wrist, a sprained wrist with a flick of the shoulder and a broken ECG machine with a swift application of the defibrillators. Noble doesn't believe in God, and regards sex as a necessary and normal consequence of playing Doctors and Nurses. He can't understand Flynn's scruples, but he is kindly towards him.

Noble is played by Alexander Armstrong

Mr. Ron is the Consultant. Utterly mercenary, utterly grandiose, utterly useless. He can never remember any of the patient's names, and expects people to cluster around him supplying him instantly with facts, diagnoses, pens - and patient's names. Inasmuch as he recognizes Junior Doctors at all, he dimly perceives that Flynn is probably useless. Conversely, the rest of the firm think he's a twat. They're right. So do all the patients. They're also right.

Sister Hope is the Ward Sister. Second generation Afro-Caribbean. She runs her ward like a big nursery and treats the doctors as slightly tiresome over-anxious parents. If she's on nights, she's quite likely to tie patients up in order to get a good night's sleep and thinks that pain relief is only for big babies. She runs a constant war of attrition with Noble and Flynn, not least by waking them up in the middle of the night for the most trivial things she can think of. She is deeply religious in a Baptist sort of way, and thinks that Catholics are weird.

Staff Nurse Judy is the highly competent linchpin of the firm. She knows her arse from her elbow. Flynn's never met such cool competence before. Judy knows that Flynn dotes on her - all Junior Doctors do. She's just not interested in sex, and if she was, it wouldn't be with hapless schoolboys like Flynn.

As for Sid, the Chaplain, Gasman, Wheelchair Man, Terry and The Linen Lady - well, you'll meet them soon enough.

Performance on 9/2/01
This was a conflation of what was to become Script 1 & 2, adapted for reading “round a table” in front of the Controller of BBC2, Jane Root.

In this first episode, Dr. Flynn has just qualified as a doctor and is plunged into his first shift at the dreaded South Middlesex Hospital. He'll meet a talking corpse, a mad German anaesthetist and a drugs bust, but will he ever see daylight again? Only Dr. Noble can help him…

Junior Dr. Flynn is about to meet a 83 year old patient with a difference, a vampire on the loose, a toffee in a belly-button, a nasty photocopier incident and some anthrax. Meanwhile, he's beginning to fall for Staff Nurse Judy and accidentally gets sectioned under the Mental Health Act…

Junior Dr. Flynn is on a mission of the utmost medical emergency - to try and get a clean white coat before the next Ward Round with the consultant, Mr. Ron. The only things stopping him are a rat, the Pet Shop Boys and the spleen of the local priest.

The South Middlesex Hospital has lost all three of its NHS Ratings stars and it's Dr. Flynn and Dr. Noble's job to get them back. Which they do with the help of some X-Ray Specs, two jars of maggots and a lot of blood. Really a lot.

The South Middlesex Hospital has lost all three of its NHS Ratings stars and it's Dr. Flynn and Dr. Noble's job to get them back. Which they do with the help of some X-Ray Specs, two jars of maggots and a lot of blood. Really a lot.

See all the characters in the photo gallery...

You can buy the DVD by clicking here

And normally, we don't link to YouTube, but we couldn't resist this one - for some reason, someone has translated the titles into German and put them on YouTube here. We think it means something like "Dr. Flynn - survival is a matter of luck."